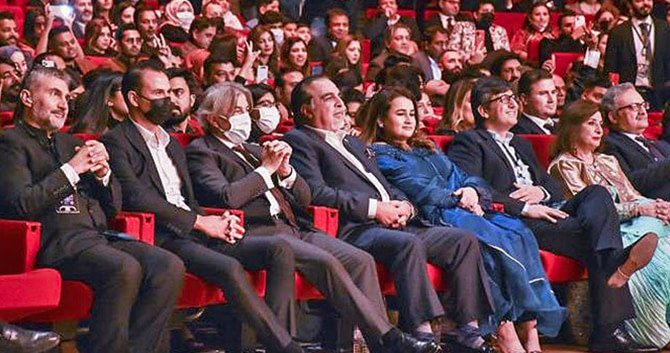 ISTANBUL – The International Pakistan Prestige Awards (IPPA), attended by famous artists with millions of fans of Pakistani and Asian cinema, was held at Istanbul Haliç Congress Center with the participation of Deputy Minister of Culture and Tourism Ahmet Misbah Demirca. Famous actors, directors and producers from Pakistani cinema called Lolywood and from different countries came to Istanbul for the ceremony held in cooperation with HUM TV and the Turkish-Pakistani Tourism Council.

The IPPA award ceremony, which is held in a different city from Europe every year, is held in Istanbul for the first time. The candidates for the 4th IPPA award ceremony, which has not been held for 2 years due to the pandemic, were determined according to their 2019 performances. At the event, Pakistani actors, directors, producers and artists were awarded in 21 different categories.

TV series IN PAKISTAN Deputy Minister of Culture and Tourism Ahmet Misbah Demircan stated that they know Pakistani people’s love for Turkey and their interest in Turkish TV series and said: “It makes us happy that such an important event of Pakistan was held in Istanbul. Therefore, we are happy that they have made an international award in Istanbul. It is an area that has endless benefits and interaction both in cultural interaction and in the promotion of countries. As you know, Turkish TV series are very popular in Pakistan lately. Because our culture is the same, our feelings are the same, our outlook on life is the same. I think we will watch Turkey-Pakistan joint TV series and film productions in the coming days.”

IT IS SATISFIED TO HOST A GREAT EVENT.

President of the Turkish-Pakistani Tourism Council Emin Çakmak stated that the 4th International Pakistan Prestige Awards were held in Istanbul and said, “We have been holding a very important event for Istanbul and Turkey. The International Pakistan Film Awards ceremony has been for two years due to the pandemic. It is very important for us and for our country to bring the artists with millions of fans and the biggest Award Ceremony not only in Pakistan but also in Asia to Istanbul.” Emin Çakmak stated that nearly 150 actors, producers and directors from Lolywood cinema attended the award ceremony and said, “All television channels from Pakistan broadcast live from here. This program will be on the agenda for 1-1,5 months. It is an important promotion for Turkey. and it will be a source of pride. The main purpose of the event is the distribution of the awards won in 2019.”

IT IS SATISFIED TO HOST A GREAT EVENT.

Pakistani actor Adnan Siddiqui expressed his happiness to represent Pakistan and said, “I feel really great. We are here for a very good cause.” Stating that Turkey and Pakistan will remain friends forever, he said, “Our friendship is improving day by day. Directors and producers from Pakistani cinema collaborated with a production team from Turkey. This will be an important start for the cooperation between Pakistani and Turkish cinema.”